I am a director of the Associates of the Boston Public Library. We raise funds for conservation and education and run the annual Literary Lights banquet, which honors New England authors. 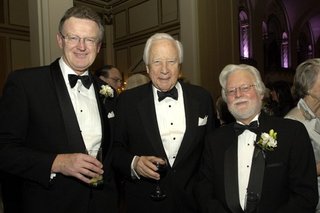 In 2011, I introduced Thomas Cook, pictured here with David McCullough. 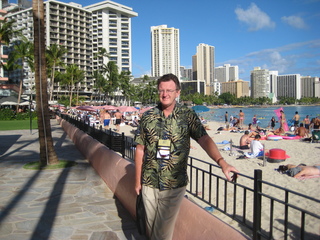 A tough job, but... just finished my lecture at the wonderful Hawaii Writers Conference, 2009...

Researching The Lincoln Letter. We are standing near the site of the Civil War-era Armory Square Hospital, a location in the book.

William Martin is the New York Times bestselling author of twelve novels, a PBS documentary, book reviews, magazine articles, and a cult-classic horror movie, too. His first Peter Fallon novel, Back Bay, established him as "a master storyteller." He has been following the lives of the great and anonymous in American history ever since, taking readers from the Mayflower in Cape Cod to Ford's Theater in The Lincoln Letter to the South Tower on 9/11 in City of Dreams. His latest, Bound for Gold, sweeps readers back to California in the legendary year of 1849 and "solidifies his claim as king of the historical thriller" (Providence Journal). He was the 2005 recipient of the prestigious New England Book Award, given to an author "whose body of work stands as a significant contribution to the culture of the region." In 2015, the USS Constitution Museum gave him the Samuel Eliot Morison Award, for "patriotic pride, artful scholarship, and an eclectic interest in the sea and things maritime." And in 2018, the Mystery Writers of America (New England Chapter) gave him the Robert B. Parker Award. He serves on the boards of many of Boston's historical and cultural organizations, lives near Boston with his wife, and has three grown children.